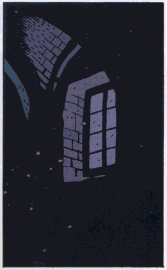 A panel in a Comic Book, Manga, or Webcomic featuring just scenery. No characters, no dialogue from off-scene characters, and minimal (if any) narration.

Silent Scenery Panels can serve several purposes. Most often, one is used at the beginning of a scene, as the Sequential Art equivalent of an Establishing Shot or Aspect Montage. Used in the middle of a scene, they can imply movement or the passage of time, without the artist having to laboriously redraw characters. They can also serve as pacing, slowing down a story that would otherwise seem frantic.