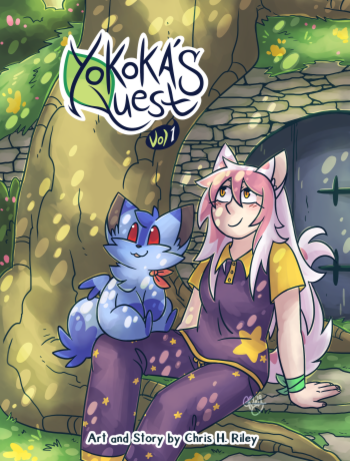 Yfa (left) and Yokoka (right)
"Wow, our first quest! This is it, isn't it? The start of our adventure! We already get to help someone out!"
— Yokoka

is an RPG-themed Fantasy webcomic written and illustrated by Chris H. Riley, aka ClefdeSoll. The story separately follows Half-Human Half-Demon Cat Girl Yokoka discovering the larger world for the first time, and her broody twin brother Mao, in a dual-perspective story. While there is plenty of foreshadowing of a bigger overarching plot, the titular character has yet to become aware of it.

Yokoka's Quest can also be read for free at yokokasquest.com

. The webcomic began in September 2015, and has been regularly updating on Mondays, Wednesdays, and Fridays since, with the exception of short hiatuses between chapters.

There will also be some upcoming marked and unmarked spoilers, so if you've not read the comic yet, read this article at your own risk!