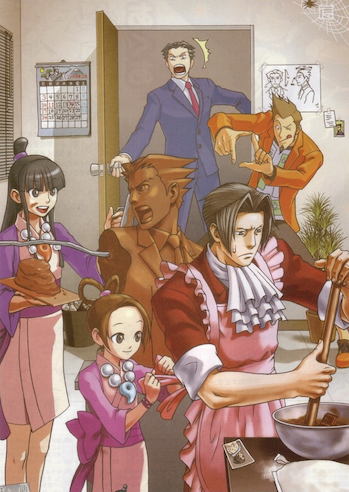 Taking a break from courtroom antics for some kitchen antics.
Often artists make what could be described as official Fan Art. They draw scenes of the characters doing things that aren't actually in the work as such.
Advertisement:

They could range from Beach Episodes to Christmas Scenes, to Fashion Shows, to Weddings of the Official Couples, to Alternate Universe settings, to Characters Switching Clothes, to Cosplay Fan Art. Again, it's anything a fan artist might do (that's still acceptable for the rating of the worknote unless there is some official Rule 34 art), just by the actual artists of the work, or people officially hired to draw them.

Currently, this is a particularly widespread trope for anime and manga, seen in many online galleries and even in books that are collections of these. Many Webcomics have these as well, often in the form of "voteys" - bonus images which you get to see if you vote for that comic on one of the various comic-ranking sites.

While seldom seen today, this sort of material used to be a staple of American Comic Books (primarily in the Romance and Teen Humor genres, or any other comics with a significant female readership.) "Fashion Pin-Ups" showing the characters in different outfits were common, as were reader-submitted fashions — often redrawn by professional artists, with credit to the young designer.

A Sub-Trope of Bonus Material. Compare Staff-Created Fan Work, where staff create fanart without input from the main source.