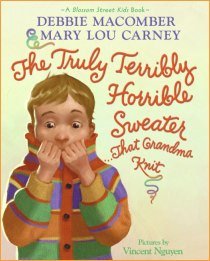 It truly is.
"Gee. I hope this package doesn't have a bomb or a monster in it. GASP! IT'S EVEN WORSE THAN MY MOST HIDEOUS FEARS! It's another sweater for me from Jon's mother."
— Garfield, March 8, 1983

The Homemade Sweater from Hell is a sweater that is one step from being pixelated if it's on television — or otherwise garish. The sleeves might be different lengths, initials might be knitted into it in a bizarre fashion, it might be an awful color or an awful mix of colors, it might be a childish pattern in an adult sweater, or it might just be tasteless. It might even be awfully itchy. And it was a gift from someone who picked it out or knitted it specially (most often parents and grandparents), so even if the character normally has taste, they'll have to wear it and pretend they love it to avoid offending the gifter.

Sometimes it will actually look like a perfectly wearable sweater, but most characters will react to it as if it were the most hideous thing ever - an Informed Attribute that's like a distant inanimate relative of Hollywood Homely.

This happens most often during Christmas Specials, since that's when most Homemade Sweaters from Hell are worn in Real Life, and also because Christmas imagery lends itself very well to tacky designs (which can range from making the wearer look like they belong underneath the tree to looking like they belong on it). But it doesn't have to be Christmas. A character with a sufficiently bad sense of style or financial problems might wear them all year, weather permitting.

With a hint of Irony, these kinds of Christmas Sweaters briefly became high fashion

A Sub-Trope of Unwanted Gift Plot and Impossibly Tacky Clothes. Often overlaps with Crappy Homemade Gift, and always does with Clothes for Christmas Cringe. May overlap with Needlework Is for Old People if an old person knits it (which they often do). It might also overlap with The Dreaded "Thank You" Letter if someone has to write to the gift-giver to say thank you.

Compare My New Gift Is Lame. Contrast Sweater Girl when the sweater is seen as attractive rather than tacky, and Handmade Is Better for when the fact that the clothing is handmade is treated as desirable/impressive instead of lame.

For Employee Brotherhood Day, SpongeBob makes Squidward a sweater out of eyelashes.

For Employee Brotherhood Day, SpongeBob makes Squidward a sweater out of eyelashes.