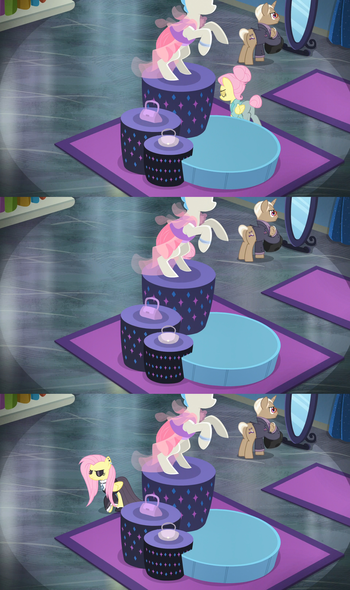 She isn't even the one who usually does this.
Advertisement:

Cartoon characters get all the cool abilities. They can bounce back from Amusing Injuries, bounce off walls like rubber, and pull random stuff out of Hammerspace. Then there's this. Cartoon characters seem to carry alternate outfits in Hammerspace. But, they rarely have to reach into their hyperspace pouch to change clothes. They can run offscreen and return with an entirely different wardrobe on, they can spin in place to change clothes, or something can pass in front of them to reveal their changed outfits.

Sister Trope to Changing Clothes Is a Free Action, which generally involves changing into a particular costume. Please put examples of super hero costume changes on that page. Hyperspace Wardrobe should contain examples of non-heroic costume changes. Compare Convenient Color Change, where no clothes are changed, but their color does. This is sometimes related to Unlimited Wardrobe, which is about how many different outfits a character has, which they may or may not carry with them in a Hyperspace Wardrobe.