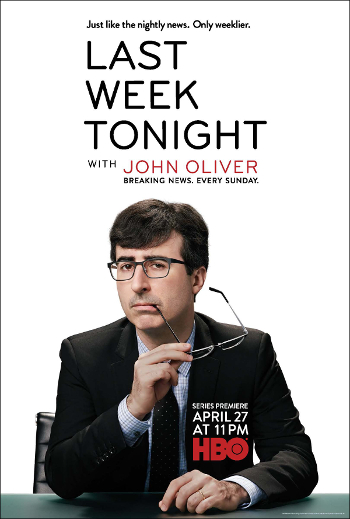 A new episode every Sunday. Well, most Sundays. We'll be taking some Sundays off.
"Welcome, welcome, welcome to Last Week Tonight! I'm John Oliver, thank you so much for joining me! Time for a quick recap of the week!"
Advertisement:

Each week, Oliver tackles some of the most important news stories of the previous week, and then segues into a longer segment where he takes an in-depth look at some important overall issue, sometimes ending the show with it, other times ending with another shorter story that has a lighter tone to it. Segments are split up by short, narrated sequences that either attack an outdated cultural item, or use a montage of clips of media personalities and politicians doing silly things. Interviews appear sparingly and from a variety of personalities.

Because the show airs on HBO, it has more creative freedom than a late-night basic cable talk show; and, in an interview on The Daily Show, Oliver made fun of the fact he can curse as much as he likes without being censored. And with no commercials, Oliver has the full 30 minutes (and sometimes longer) to explore issues in greater depth.

And Now, These Tropes:

John Oliver, whose show is owned by WarnerMedia, wastes no time mocking the then-recently-announced merger of WarnerMedia and Discovery Inc.

John Oliver, whose show is owned by WarnerMedia, wastes no time mocking the then-recently-announced merger of WarnerMedia and Discovery Inc.