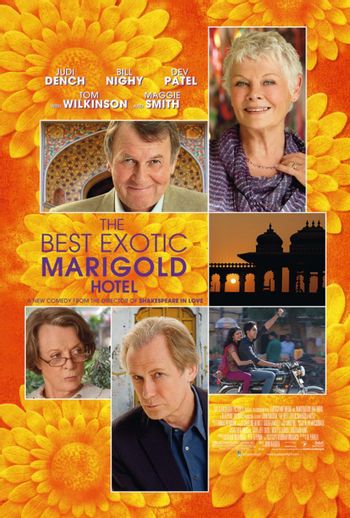 The Best Exotic Marigold Hotel is a 2011 film starring Judi Dench, Bill Nighy, Penelope Wilton, Ronald Pickup, Celia Imrie, Tom Wilkinson, Maggie Smith and Dev Patel. Its seven main characters are retired British people, who are all staying at the eponymous hotel after despairing of life back in Blighty.

Evelyn is recently-widowed and is forced to sell her home to pay off her deceased husband's debts, leaving her facing having to move in with her well-meaning but patronising son and his family.

Muriel is a rather racist old lady who's in badly in need of a hip-replacement, with the choice of either sitting on a 6-month waiting list to get the operation done in England, or letting the hospital outsource her to India (which is full of Indians(!)).

Douglas and Jean are a recently-retired couple who are left short of funds after an apparently unwise investment of their retirement fund, and who don't yet feel they're anywhere near old enough to move into the sheltered accommodation that they can afford.

Graham is a High Court judge who, having threatened for years to retire "any day now," walks out part way through a colleague's retirement party, declaring that "Today is the day."

Norman and Madge are both single, past their best, and lonely. Madge wants a wealthy husband so that she can live out her twilight years in comfort and luxury; while Norman is struggling to deal with the sex drive of a teenager in the body of a pensioner.

And Sonny is an enthusiastic young man who has inherited a "characterful" hotel from his late father, and who isn't going to let a little thing like cold, stark reality get in the way of his dreams.