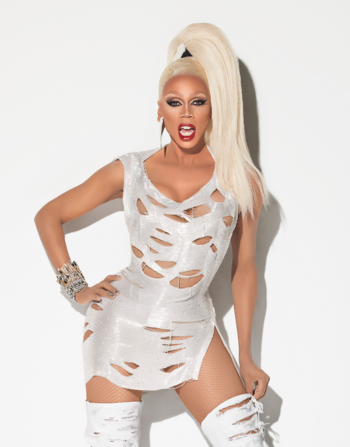 RuPaul Andre Charles (born November 17, 1960 in San Diego, California), known mononymously as RuPaul, is an American actor, musician, writer, producer, supermodel, entrepreneur, and drag queen. By far the preeminent living face of drag in North America and much of the Western worldnote The title, of course, being held by the late Divine, he's been a pop culture fixture for much of the 90's and later became known as the creator and host of RuPaul's Drag Race, which not only revived his own career, but has become partly responsible for bringing the art of drag into mainstream popular culture since its debut in 2009.

Ru was born in 1960 in San Diego, California. His affectionately-foulmouthed mother gave him his distinctive name to encourage him to become a star, because as she put it, "Ain't no motherfucker alive got a name like that!" At the age of 15, he moved with his older sister to Atlanta, where he started his performing career, dabbling in drag, acting, and singing in his glam rock band Wee Wee Pole. And selling used cars by day. After nine years in Atlanta, Ru moved to New York City in 1984 with fellow drag queen Lady Bunny to go for the big time. In addition to taking the crowded NYC drag scene by storm, his first mainstream appearance was as a backup dancer in The B-52s' video for "Love Shack". From there, he made several friends in the media and became known to the general public for his brief but memorable bit parts in films and TV.

As a recording artist, Ru has released ten studio albums as of 2016. His debut single "Supermodel (You Better Work)

" was the theme song for MAC Cosmetics during his years as their spokesmodel, and became a minor US chart hit in 1992. He's also collaborated with the likes of Elton John, Taylor Dayne, and Martha Wash.