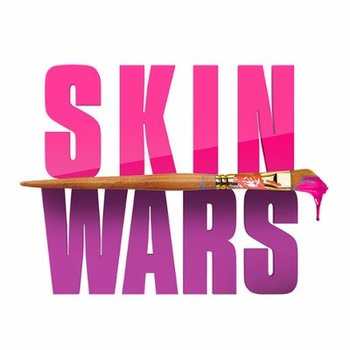 Skin Wars is a body painting Reality Show hosted by Rebecca Romijn that premiered on Game Show Network on August 6, 2014. Contestants compete to win a final prize of $100,000 as well as other prizes such as body paints and equipment. The judges usually consist of RuPaul, master body painters Craig Tracy and Robin Slonina, and various celebrity judges sometimes joining in as well.

Each week contestants compete first in a smaller challenge, usually only involving painting part of their model, to win and advantage in the second challenge (e.g. extra time, their choice of concepts). The second challenge involves at least one head to toe painting challenge, and the artist with the lowest marks is sent home that week and told "It's time to wash off your canvas." Occasionally the contestants will compete in pairs or teams rather than by themselves.

A spinoff called Skin Wars: Fresh Paint hosted by RuPaul aired as a special on August 26, 2015. It featured six highly accomplished artists, each at the top of their game, as they leave their comfort zones to compete in body painting for the first time. The artists must conquer three difficult challenges as they are mentored by three top artists from the first season, Dutch Bihary, Lawrence "Gear" Duran and Natalie Fletcher. As the artists work closely with their body painting mentors they try to quickly master the craft and win the $10,000 prize.