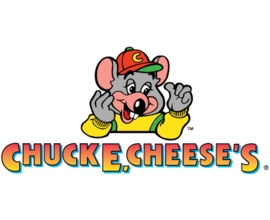 The concept is a sit-down pizza restaurant with arcade games, amusement rides, an animatronic show, and indoor playground equipment called Sky Tubes that are all directed primarily at children. The brand is represented by Chuck E. Cheese, an anthropomorphic mouse.

Chuck E. Cheese's, originally referred to as Chuck E. Cheese's Pizza Time Theatre, was founded in 1977 by Atari founder Nolan Bushnell. It was officially labeled as the first family restaurant to integrate food, animated entertainment, and an indoor arcade. Pizza Time Theatre, Inc., began to suffer financially in the mid-eighties due in part to The Great Video Game Crash of 1983 before its purchase by rival ShowBiz Pizza Place, Inc. (known for its own animatronic band, The Rock-afire Explosion). Under the name ShowBiz Pizza Time, Inc. (currently CEC Entertainment,) both concepts were run side-by-side for several years. Eventually the decision was made to convert all locations into Chuck E. Cheese's restaurants,note In the U.S. only, at least. In Mexico (as ShowBiz Pizza Fiesta) and the Middle East, they kept the ShowBiz Pizza name there instead, possibly because it was easier to pronounce in both Spanish and Arabic, while the Guatemala location wasn't turned into a Chuck E. Cheese's until 1995. which meant replacing the cosmetics on the Rock-afire Explosion animatronics

in order to turn the characters into Chuck E. Cheese and his friends note Rock-afire Explosion animatronics are still in operation in various parts of the United States and Canada, albeit in various states of disrepair. A good handful of these are still around; Any time you walk into a Chuck E. Cheese's with an animatronic show split up onto three stages, that store was likely a Showbiz Pizza.

In 2012, Chuck E. Cheese's announced that their mascot would receive a major makeover to make the rodent look thinner and more like a rock star. Chuck E.'s longtime voice actor Duncan Brannan was replacednote some say unceremoniously by Jaret Reddick, lead singer of the musical group Bowling for Soup.

See this website to see the largest online archive of anything Chuck E. Cheese related, though it's more ShowBiz Pizza-focused

Speaking of ShowBiz Pizza, compare Chuck and his friends with The Rockafire Explosion.

Tropes from the animatronic shows include: