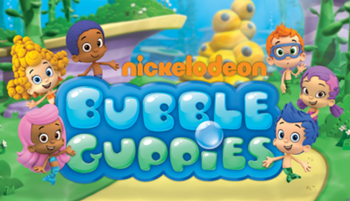 Clockwise from the top: Nonny, Oona, Gil, Molly, Deema, and Goby.
"Hi! I'm Molly, and it's time for..."
Advertisement:

Each episode follows the adventures of a group of mer-children and the lessons they learn at their underwater preschool. Along the way, they sing, dance, and have imaginary adventures while exploring concepts of the episode's theme, such as pet care, the solar system, or how to run a restaurant.

The show initially wrapped in 2016 after four seasons. Production ended, and the show's creators moved on to make a new series titled Butterbean's Café. It was rebooted in June 2019, and a new character, Zooli, joined. The fifth season, which premiered on September 27, also switched to a new format where the story segment takes up a majority of the episode. The Gil and Molly sketches, dance songs and field trips are removed, and the lunch jokes are incorporated into the narrative.

Let's think about what tropes are used on the show: