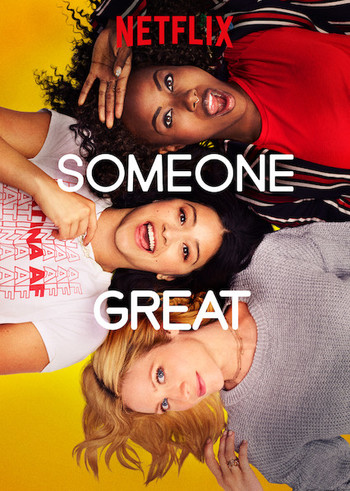 Someone Great is a breakup comedy-drama directed by Jennifer Robinson. It was released on Netflix on April 19, 2019.
Advertisement:

Jenny Young (Gina Rodriguez) is an aspiring music journalist about to move from New York City to San Francisco after landing a promotion at Rolling Stone. A short time before she is about to leave, her boyfriend of nine years, Nate (Lakeith Stanfield), breaks up with her, leaving her shocked and confused. Jenny recruits her two best friends since college, free-spirited Erin (DeWanda Wise) and prim Blair (Brittany Snow) for one last outrageous girls' night at a music festival they used to frequent. Along the way, they confront their own issues with relationships, each other, and growing up.