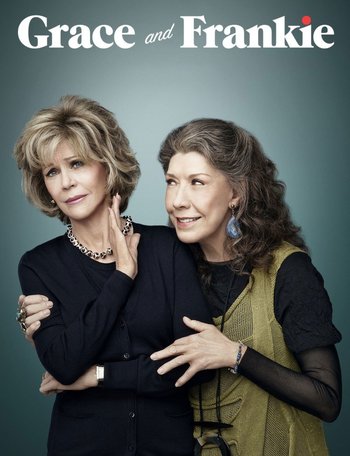 "Have you ever wondered if Ben and Jerry make more than ice cream together?"
— Frankie
Advertisement:

Grace and Frankie is a Netflix original series, co-created by Marta Kauffman (Friends).

It stars Jane Fonda & Lily Tomlin as two rivalrous women whose business partner husbands (Martin Sheen & Sam Waterston) suddenly leave them for one another after admitting to their decades-long affair. With nowhere else to go, both women end up moving into their shared beach house together, and hilarity ensues.

Tropes appearing in the series: