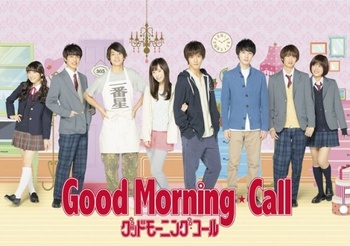 Good Morning Call is a Netflix Original Romcom. A live-action adaptation of the 1997-2002 Ribon-published Shoujo manga of the same name created by Yue Takasuka, it runs on an even mixture of Rule of Funny and Rule of Drama and, oh, did we mention the Romance Tropes? 'Cause there's many.

High School girl Nao rents her own Tokyo apartment after her parents move away to the country so she can finish school in the city. Too late she realizes the apartment she now calls home has also been leased to her schoolmate Uehara, both of them having been tricked into signing the contract. Despite their initial horror they quickly must agree that due to a lack of funds they'll have to share - and no one can know about it either, as neither the school nor their families would allow the underage students to live together. Very soon, trouble arises when Nao's group of friends starts getting nosy, and Nao has to realize that there's suddenly a whole number of boys in her life vying for her attention ...

Here there be spoilers for the first season. The second season debuted on Netflix in late 2017.