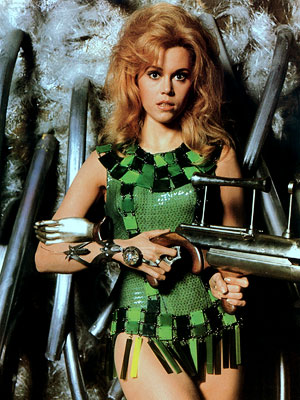 Jane Seymour Fonda (born December 21, 1937) is an American actor, political activist, and former fashion model. Daughter of the legendary Henry Fonda, she followed her father into acting. She is the sister of Peter Fonda and aunt of Bridget Fonda. After achieving a great deal of notability (as well as a large male fanbase) for her roles in films like Cat Ballou, Barefoot in the Park, Barbarella, They Shoot Horses, Don't They?, and Klute, for which she won an Oscar, she pulled the PR gaffe to end all PR gaffes.

Fonda, like many of her generation, protested The Vietnam War. However, going to Hanoi in 1972 and publicly supporting North Vietnam (including allowing herself to be photographed sitting on an AA gun) was a step too far for the US public, gaining her the nickname "Hanoi Jane". She later apologized (for the photo, not her trip in general), but many still see her as a traitor. To this day, "latrine targets" with her picture are commonly found in US military urinals. It doesn't help that she also made broadcasts on Radio Hanoi that (whether intended to or not) were exploited by the North Vietnamese for propaganda purposes, and helped in using American POWs as props at a staged "Press Conference" to "prove" to the world that the POWs were not being mistreated and were merely opportunistic liars, and years after the war continued to denigrate the men who were held and tortured by Vietnam as "liars" when they came forward to describe the abuse doled out to them. (However, the second part of the story, that Fonda deliberately betrayed POWs who asked her to smuggle messages back home to the guards, was totally made up

Her career waned in the mid-'70s, but at the end of the decade, she had a successful comeback, winning her second Oscar for the Vietnam War film Coming Home. In 1980, she had one of her greatest commercial successes with 9 to 5. In 1981, she appeared as Henry Fonda's daughter in On Golden Pond.

In The '80s, she released a series of very successful workout videos, popularizing aerobics. In 1990 she retired from filmmaking, but returned in 2005 with Monster-in-Law. In 2009 she appeared on Broadway again for the first time in 46 years, in 33 Variations, a play about a scholar of the work of Ludwig van Beethoven. Between 2012 and 2014, she appeared in a recurring role in the TV series The Newsroom. Since 2015, she has been appearing in the Netflix original series Grace and Frankie.

An outspoken liberal, she has been politically active in several causes; she has supported civil rights, the feminist movement, and Native American rights, and opposed the Iraq War. She was married three times, to director Roger Vadim (1965-1973), political activist Tom Hayden (1973-1990) and media mogul Ted Turner (1990-2001); all three marriages ended with divorce.

She has won two Oscars (for Klute and Coming Home) and has been nominated for five more (for They Shoot Horses, Don't They?, Julia, The China Syndrome, On Golden Pond, and The Morning After).

Oh, and she has made out with