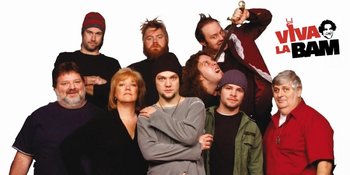 Bam Margera! What will he do next? Whatever the fuck he wants. note  Characters going clockwise from center: Bam Margera, April Margera, Phil Margera, Tim Glomb, Ryan Dunn, Rake Yohn, Brandon DiCamillo, Don Vito, Raab Himself
He's Bam Margera!
He loves to skate!
He also likes to shake things up a bit...
Advertisement:

Viva La Bam, one of the Spin Offs to MTV's hit show Jackass, focused on Bam Margera — but instead of focusing on brief stunts and skits, Viva La Bam focused more on the general antics and shenanigans of Bam, his crew of friends, and his family in his hometown of West Chester, Pennsylvania. Bam's friends included Ryan Dunn, Chris "Raab Himself" Raab, Brandon "Dico" DiCamillo and Rake Yohn, while family members featured on the show included Bam's dad Phil, his mom April (aka "Ape"), and Bam's uncle Don Vito. Although the show didn't focus much on stunts, it still carried a Don't Try This at Home disclaimer before each episode.

The show lasted for five seasons (from 2003 to 2005), which means it technically lasted longer than Jackass itself. Most of the episodes had some kind of theme or challenge that the cast members (usually Bam and his crew) had to accomplish through stunts, pranks, or assistance from a number Bam's associates and celebrity friends. Although Bam and his crew improvised a good deal of the show, a greater degree of planning and organization supported the entire endeavour. Either way, when Bam and his crew got going, Hilarity soon followed.