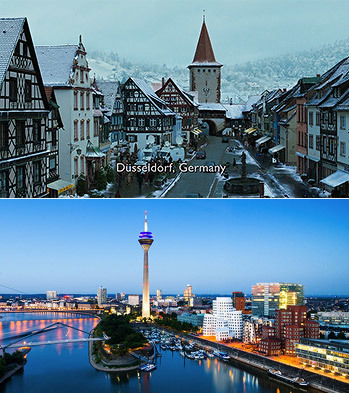 Düsseldorf according to Charlie and the Chocolate Factory (top) and in Real Life (bottom).
"We are we and write us us - it's Bavarian liberalitas!
We are the Jesus mountain Chetniks, fighting for the Kruzifix.
Drinking beer from grossen Mass, Weisswurst and Leberkas,
Holleri and hollera, welcome to Bavaria-a-a!
*cue yodeling*"''
— Die Biermüslblosn, "Welcome To Bavaria"

In Germany, everyone is fat, constantly drunk on beer, dressed in lederhosen suspenders, eats nothing but sausages and pretzels, and gets totally ticked off whenever somebody mentions The War. If you're lucky, you might get a mention of more recent events - such as the Berlin Wall and David Hasselhoff.

It's pretty likely that the beer is being served by one of those wenches with gravity-defying blonde braids and big breasts pushed up by the 'uplift bodice' on her dirndl. If so, expect Ach Du Lieber Augustin.

If you're in a modern nightclub, expect to it to be a strange one involving a lot of leather. And possibly nihilism.note We believe in nothing!

The prevalence of these stereotypes has partly to do with the fact that many American units were assigned the southern part of Germany as their occupation zone at the end of World War II and as such most of their military personnel took their experiences of bucolic Bavaria as the archetype of all things German back home. Hollywood and TV then ran with this selective memory. note A British joke about post-WW2 occupation is "The French got the wine. The Russians got the women. The Americans got the scenery. We got the rubble. Another contributing factor is that a significant portion of the German immigrants to America came from the rural regions of Southern and Eastern Germany - notably, again, Bavaria. To this day one will find German-Americans proudly operating traditional Biergartens and breaking out the Lederhosen, steins, sausage, polka, and sauerkraut at any opportunity, much to the chagrin of any modern Germans trying to shed exactly this folksy image. While the intention is an honest celebration of their heritage, it can reach a point of Misaimed Fandom and Self-Parody at times, similar to the enthusiasm of those of Oirish descent.

Of course, many foreign authors discover there is more than one region of Germany. Sadly these "discoveries" tend to include regions like the Black Forest where they grow cuckoo clocks, fairy tales, and gingerbread houses. In Prussia, of course, the men are all Badass Longcoats who have crew cuts, monocles, duelling scars and interrogation sessions that start with "Vays off makink you talk", while of course, their Distaff Counterpart The Baroness is happy to assist. Oddly, while the stigmatic association with swastikas and blitzkrieg is fading as time progresses, this archetype seems to be morphing into an image of tight-laced basketcases, Goths, and fascistic Dominatrixes who frequent badly-lit discotheques blaring Electronic Music, and their ways of making you talk consists of the baroness enacting unspeakable bondage, domination and sadomasochism. But be prepared to listen to a detailed history of Imperial Germany before they went and ruined it for everyone.

German fiction has tropes of its own regarding "Ossis und Wessis" (former East and West Germans respectively): Wessis are supposedly materialistic, arrogant assholes, while Ossis are usually poor, bad-tempered, lazy whiners. And Hamburg is the Freestate Amsterdam of Germany, while Berlin - of course - is something of its very own NYC.

By the way, Germans do have a sense of humor. Although a stereotype, it's still better than the other thing Germany is known for. But not much. Invoking this stereotype will give you a very hard time making friends with any Germans.

Oh, and by the way, Oktoberfest is celebrated in both late September AND through early October.

For the Real Life location of the Oktoberfest, look no further than Munich.

Compare also their closest neighbors, Yodel Land, Land of Tulips and Windmills, and Ruritania (if you're lucky) and Überwald (if you're not).