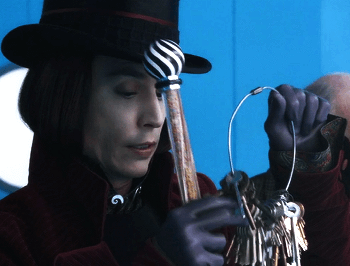 Once you get locked into a serious key collection, the tendency is to push it as far as you can.
Advertisement:

A character has a large keychain with many, sometimes dozens, of different keys. As a result he has quite some trouble finding the right one when he needs it.

When Played for Laughs, the character will proceed to go through the keys one by one, naming the function of each, until he gets the right one. Bonus points if, while doing this, they discover at least one key among them with a...rather embarrassing function.

Can also be Played for Drama to create tension in the same manner as Dangerous Key Fumble. And of course, a character can intentionaly invoke this trope to stall time.