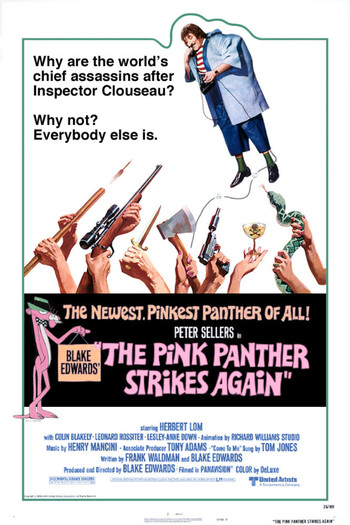 The Pink Panther Strikes Again (1976) is the fifth film in The Pink Panther franchise, once again directed by Blake Edwards and starring Peter Sellers as (now-Chief Inspector) Clouseau.

Three years after the events of The Return of the Pink Panther,note though this film was only made one year after Former Chief Inspector Dreyfus (Herbert Lom) is seemingly cured... but after meeting up with Clouseau just prior to his planned release from the psychiatric hospital, the therapy is undone. Dreyfus escapes and organizes a criminal gang that kidnaps nuclear physicist Hugo Fassbender (Richard Vernon) and his daughter Margo (Briony McRoberts). Forcing the former to build a Disintegrator Ray, Dreyfus threatens to unleash it on the world unless Clouseau is killed, and many countries immediately send assassins after Clouseau as he sets out to stop Dreyfus himself.

Followed by Revenge of the Pink Panther.

Pink Panther in the Rain

During the opening titles that parody many different films, the Pink Panther and Clouseau briefly reenact Singin' in the Rain.

Example of:
Spoofing in the Rain

Pink Panther in the Rain

During the opening titles that parody many different films, the Pink Panther and Clouseau briefly reenact Singin' in the Rain.