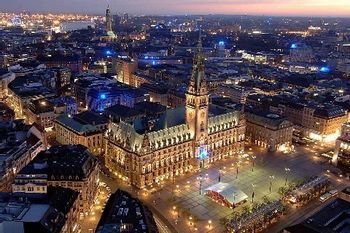 The Free and Hanseatic City of Hamburg has been Germany's second-largest city ever since Vienna stopped belonging to Germany (i. e. 1866).note Interestingly, Berlin has nearly double as many residents but its area is only 10% larger. This position was cemented when Hamburg (north of the Elbe river, built around the Alster river), Altona (west of Hamburg), Wandsbek (east of Hamburg) and Harburg (south of the Elbe river and Hamburg) were united by the Groß-Hamburg-Gesetz (Greater Hamburg Law) of 1938. Hamburg also is the second largest city in Europe (behind St. Petersburg) that is not a national capital. Although it is technically not a coastal city and a good 60 miles away from the North Sea, it has a quite maritime flair, also due to being a traditional Merchant City and former part of the Hanseatic League, and Europe's second-largest seaport because big sea-faring ships can sail up the Elbe river. In the time of All the Little Germanies it was a sovereign state, and it continues that independent streaks as one of the Federal States of Germany all by itself.

Hamburg was founded early in the 9th century as the seat of a bishop to bring Christianity to the territories to the Slavic people in the east and the Scandinavians to the north; the most famous among the bishops of Hamburg was St. Ansgar, the "Apostle of the North". However, this did not make the town popular, and it was burned down a few times during the following years by Vikings coming up the Elbe and by Obodrites from Mecklenburg, and the seat of the bishop was moved west to Bremen. During the Middle Ages Hamburg gradually achieved de facto independence from the bishop and the count of Holstein, and it has been a self-governed state of its own ever since, with a few minor interruptions (from 1811 to 1814 it was officially part of France, for instance). As a small state, it was not able to "make history" of its own, so the big events in the city's history tend to be its major disasters, notably the Great Fire of 1842 (which destroyed over a third of the inner city), the Firestorm of 1943 ("Operation Gomorrha", which after World War II led to a macabre rivalry with Dresden over which city had suffered more), and the storm flood of 1962 (which first brought Helmut Schmidt and his competence for managing a crisis to national attention).

As Hamburg is proud of its status as an old Free City and thus one of the two oldest republics in modern Germany (along with rival sister Bremen), it uses special historic names for the parts of its government. The executive is called "Senat" after the old city council (German: Rat, Latin: Senatus) and is headed by the "Erste Bürgermeister" (first burgomaster or first mayor). A Hamburg "Senator" is the equivalent of a minister in other German states. The state parliament is called the "Bürgerschaft" (citizenry) after the citizens' assembly of the pre-1860 political system. As a traditional merchant city Hamburg has a bit of a image of being prosaic and hostile to culture, but it actually has a rich cultural history. Part of the reason for Hamburg's negative image is that Hamburgers have always been unsentimental about old buildings and rarely hesitated to tear down entire neighborhoods if they felt it was necessary e. g. to make room to expand the harbour. Despite this image, Hamburg generally is considered one of Germany's most beautiful cities.

Foreigners and fiction often reduce Hamburg to its Red Light District which is referred to as "Reeperbahn" (the main street that goes through it) everywhere outside Hamburg and "Kiez" by Hamburg's citizens; justified in that sailors who used to be the largest group of foreigners to come to Hamburg went there straight from the nearby seaport and actually didn't see much more of the city in the first place. Unlike certain rumors, prostitutes and brothels don't line up along the Reeperbahn anymore — it's the Herbertstraße where they do. Also, it's there (although not on the actual Reeperbahn, but in the Große Freiheit) where The Beatles started their career in 1960.

However, there's a lot more to Hamburg.

Somewhat embarrassingly for a city that fancies itself a media powerhouse, there is no major daily newspaper with more than regional interest. The Hamburger Abendblatt is provincial enough that many residents prefer to read dailies from Frankfurt or München; the Hamburger Morgenpost is a completely standard-issue tabloid. (A tired joke is that the Abendblatt appears in the morning and the Morgenpost in the evening, even though their names say exactly the opposite.) At least the respected Der Spiegel is published in Hamburg, as are the competing Stern and the weekly newspaper Die Zeit.

ARD's Tagesschau, the longest-running nightly news program in Germany, is produced and broadcast from Hamburg.

Hamburg in the media