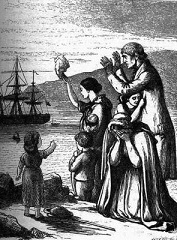 "Ladies and gentlemen, as you probably know, Ireland’s biggest export is people."
—Ronnie Drew
"Our Diaspora includes people as diverse as a third-generation Irish-American steelworker in Pittsburgh; a Dublin-born financial expert working in Hong Kong; an Irish-Australian family in Perth; a Galway-born pensioner in North London; a young Cork-born designer in Paris, and a fifth-generation Irish-Argentinian or Newfoundlander whose lilting Irish brogue is remarkably strong for someone who has never set foot on Irish soil and proof positive of the longevity of the Irish imprint."
—President Mary McAleese
Advertisement:

About 6 million people live on the island of Ireland, yet worldwide at least 10 times that number claim Irish ancestry (35 million in the United States alone), one of the few diasporas demonstrably much larger than the home population and the only one of those from outside the greater Middle East (the other big ones are the Jewish, Armenian, Lebanese, and Palestinian, so, er...). Thanks to over a century of poverty and lack of opportunities at home, the Irish can be found just about anywhere.

People in Ireland have a mixed but mostly affectionate relationship with the diaspora, especially the American part of it, including claiming the forty fourth president, Barack Obama, as one of their own

Although the larger part of the diaspora is composed of Catholic Irish descendants displaced during the 19th century, it is less well known there is also a substantial population of Northern Irish protestant descendants who maintain their connection to their original homeland in the North. This is especially marked in Canada, and has caused both sectarian strife as well as a mirror-image of the notorious support for republican terrorists expressed by Irish-Americans in the USA. Funding and support for protestant/loyalist terrorists also came from diaspora communities overseas during the years of The Troubles. note ]South Africa, especially in The Apartheid Era, was also a source of support from another people who saw themselves beleagured by hordes of alien hostiles. As with the Catholic diaspora, this is viewed at home with attitudes ranging from embarrassment to acceptance.

A crucial (and somewhat disturbing) element of the Irish Diaspora is the fact that, up until the 20th century, the Irish were not classified as white. The Irish were considered a separate race, and consequently were the historical subjects of discrimination, stereotyping, marginalization, and persecution comparable

to that of black people, right down to being insultingly compared to nonhuman primates. note That said, they obviously still had it easy compared to the literally enslaved people, despite what skinheads want you to believe

. Irish people were used as indentured servants in the American colonies, but this was markedly different from slavery (and was in fact far more lenient) in that said indentured servants were just that— servants (albeit ones who weren't allowed to "quit" their job until a fixed term was completed— but if that were considered slavery then being conscripted into military service would be as well); African slaves, meanwhile, were quite literally treated as if they were livestock. And white Englishmen and Scotsmen could also be indentured servants, either as punishment for a crime or to pay off a debt. Being particularly prominent in America and Britain, this anti-Irish racism depicted the Irish as barbaric, apish, incestuous, and alcoholic; they were even negatively compared to black people by some outlets, with British historian Charles Kingsley expressing dread at what he saw as black people in white skin (not that these comparisons were any less racist towards black people). There was even considerable effort to "scientifically prove" (via what's now seen as a particular ridiculous example of pseudoscience) that the Irish weren't white despite looking basically the same other white ethnic groups.

Irish people were also frequently scrutinized due to the fact that the Irish population— and by extension, Irish immigrants— were predominantly Catholic, which drew concerns in Protestant countries (particularly the United States) that the Irish would overtake the governments and institute a puppet leader for the Pope. This had a side-effect of Protestants conflating Catholicism with Irishness, racializing and perpetuating anti-Catholic persecution in Protestant society in a manner comparable to the recent racialization of Islam (itself conflated with Arabic people and the negative stereotype of Arabs as Islamic terrorists).

Anti-Irish racism took on many forms, appearing as heresay, printwork, political cartoons, and even legislation, such as with legislation implemented by the Know-Nothing Party, an American political organization who had their sights on persecuting the Irish through government-instituted law. The most notable example of anti-Irish legislation was the Alien and Sedition Acts, which banned immigrants from countries that the United States was at war with; this included provisions towards limiting the influx of Irish immigration.

Anti-Irish racism mostly disappeared from the public consciousness throughout the late 19th and early 20th centuries for a number of reasons. The first was that Irish immigrants gradually implanted themselves within public institutions such as law enforcement, firefighting, and law firms, providing them with institutional power that non-verbally challenged white conceptions of the Irish race. The second is that the idea of a sub-white Irish race itself dissipated from public ideology over time, possibly helped by the greater institutional power Irish people were gaining. The third is that Irish people and non-Irish whites shared a common enemy in the form of black people, with Irish contributions to black persecution putting them on more even footing with whites (albeit at the cost of furthering anti-black racism in white society). An important factor in the Irish's social ascension among white society is the fact that Irish people are equally fair-skinned by nature; sociological historians believe that had the Irish been naturally darker in skin color, they would remain marginalized to this day.

Nowadays, Irish people are classified and treated as white; within most of non-Irish society, Irish stereotyping tends to be fairly tame at worst, being delivered and received with as little gravitas as stereotyping of the French, British, German, or Americans. However, more visibly bigoted anti-Irish sentiment still lingers in certain corners of non-Irish society; for instance, Margaret Thatcher once infamously remarked to Peter Mendelson that "You can’t trust the Irish, they are all liars." In hindsight, the historical marginalization of the Irish represents the complex nature of the social construct of race, being based not only on ethnicity, but also faith, culture, socioeconomic position, sociopolitical position, and morphology (particularly skin color); it also represents how dynamic the concept of race is, with re-categorization being possible through long-term social change.

A great deal of fiction has been created which deals with relations between the diaspora and Ireland. The most famous of these is probably the John Wayne film The Quiet Man. Not only is Wayne's character himself an American "returning" to Ireland, but it was made by Irish-American John Ford as something of a love letter towards his parents' home country.

On the other hand, there's the film version of The Field, in which an American returns to Ireland to buy the eponymous field. The man renting the field, which he has turned from a barren patch of dirt to a lush expanse of green, sees the American as a traitor who abandoned the country when times got tough, and has now returned to pave over everything the faithful Irish have worked to rebuild. This is the stereotype of the "plastic Paddy", common in both Ireland and Britain, of people whose connection to Ireland may be three or more generations in the past and who only claim to be Irish when it's convenient. The "plastic Paddy" stereotype has especially negative connotations in Britain and Northern Ireland, where it's often associated with groups like NORAID that supported the PIRA with arms and money during The Troubles.