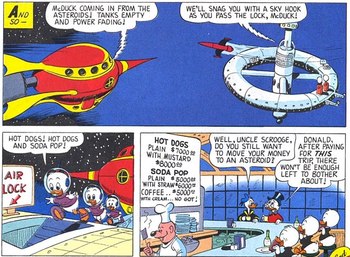 Some are pricier than others...
Advertisement:

Are you a Hero on a quest? Have you been tramping through the wilderness fighting off Mooks and monsters? Are you running out of supplies? Is the confrontation with the Big Bad approaching, causing you to wonder if can possibly complete you quest and/or survive?

We have everything you need here at our Rest And Resupply Stop.

Just be careful to keep your goal in mind and not stay here too long. After all, The Call Knows Where You Live and we’d really rather not become a surrogate Doomed Hometown.

In settings where appropriate, the RARS is often a Hidden Elf Village or equivalent. May also be an Inn Between the Worlds, the Only Shop in Town or a fantasy tavern. The video game equivalent is a Healing Checkpoint. Often contains the Action Film, Quiet Drama Scene

Truth in Television, of course, ranging from the caravanserais of the old Silk Road, to rest stops and motels next to the modern highway, to visitor centers just over the state line, and even large towns and cities that started out as important rest stops for travelers passing through.