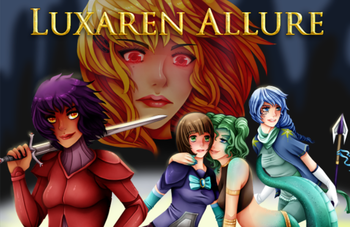 is a 2015 Eastern RPG by Unity RPG. It is a medium-sized Yuri RPG (12-20 hours) with an all-female playable cast. The game uses RPG Maker VX Ace as its engine.

The game takes place in the titular isles of Luxaren. Karuna and her best friend Aurelie were students at the School of the Unwavering Blade. One day, when a boy from the village went missing in the sinister Castle Darkloft, the duo set out to find him and bring him back to his mother. But the mission went awry when, after finding the Infernal Armor of Ellicide, Aurelie vanishes, leaving Karuna to desperately look for her to no avail. Hopeless, she eventually gave up.

Two years later, Aurelie has finally returned- as Evil Overlord Darkloft, who has become corrupted by the Infernal Armor and now leads a legion of monsters in trying to destroy humanity and Take Over the World. Karuna becomes The Chosen One, the Hero who must gather the three artifacts and defeat Darkloft. Joined by fellow student and squire Chisa, the Naga mage Merel, and the holy knight Lynette, Karuna ventures throughout Luxaren to complete her mission and save humanity. But the monsters and demons are not Karuna's only challenge- having realized her love for Aurelie, she is hesitant to fulfill her destiny to destroy the one she loves. Can she save Aurelie? Or will she have no choice but to kill her?

Unity announced the development of Izrand Allure, an RPG in the same setting as Luxaren Allure.

Compare to Corruption of Laetitia, another Yuri RPG starring four women on a quest to defeat an Evil Overlord.