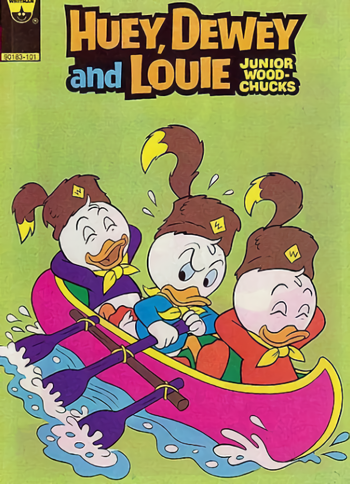 Their fourth, imaginary brother is named Phooey.
Obelix: O chief Vitalstatistix, the Normans are landing! And they've got ever such funny names! They all end in "af"!
Asterix: That's right! Their chief is called Timandahaf!
Vitalstatistix: Ha, ha, ha! Did you hear that, Getafix, Cacofonix, Operatix, Acoustix, Polyfonix, Harmonix?
— Asterix, Asterix and the Normans
Advertisement:

In fiction, it is common to give the members of the same group, family or ensemble a Theme Naming to emphasize their unity. The two most standard ways of achieving this is by having the characters' name revolve around a particular subject/topic or field (e.g. plants or celestial objects), or by having them follow a linguistic quirk.

This trope is about the latter. Specifically, this is when a collective group of characters are given names that rhyme with each other, sometimes with one character having an Odd Name Out.

This is particularly common for Theme Twin Naming, especially Always Identical Twins, since the characters already have identical appearances, so it would naturally follow that they are also given phonetically-similar names.

Compare Rhyming Names, for singular characters or places who are given rhyming first and last names to make them sound more quirky and/or memorable, although both tropes can be used together, particularly for siblings/family members that are given a rhyming surname in addition to their already rhyming given names. See also Alphabetical Theme Naming.

Owen notices that Gary has a best friend named Larry and doesn't know how to react to the fact that their names rhyme.

Owen notices that Gary has a best friend named Larry and doesn't know how to react to the fact that their names rhyme.