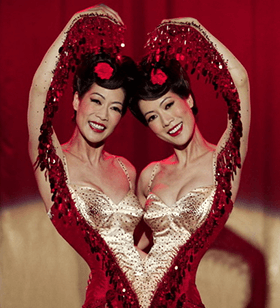 Those two are joined at the hip. Literally.
"I've had twice the adventure
I've cried double the tears.
I've had two times the bad times,
In only half the years..."
— "Twice the Love" (the "Siamese Twins Song"), Big Fish
Advertisement:

The chance of having conjoined twins is as much as 1 in 100,000; the chance of those twins surviving infancy is 25%. As of 2008, there are under 2,000 conjoined twins in the world, and about a dozen are living in the United States. You're more likely to get struck by lightning — twice! — than to meet a set of conjoined twins. But don't tell that to Hollywood — according to them, the chance of our heroes meeting two people who share one body is higher. Much higher.

Conjoined Twins combine Creepy Twins with Body Horror: Imagine being attached to another person, the same one person, for your entire life. Freaky stuff.note Unless, of course, you actually are a conjoined twin, in which case it's just daily life. As such, they are a staple of horror and any show that wants to unsettle its viewers. They are a must at carnival freak shows.

Some cases may literally have been Separated at Birth. Multiple Head Case is a subtrope, about the tendency of beings with two heads to have opposite personalities.

For our purposes, people who aren't born twins, let alone conjoined ones, but somehow still get fused together apply. With the exception of such artificial fusions, depictions of this trope which connect in places other than the body's axis (head, neck, or torso) are artistic license. Conjoined twins are also Always Identical Twins; those that aren't are likely running on Rule of Funny. May manifest as A Head at Each End in drastic cases.

Conjoined Twins are a real phenomenon and have been around pretty much forever. They became prominent in the 1800s with the rise of carnival freak shows; the most famous pair was Chang and Eng Bunker, the original "Siamese twins", who were connected at the sternum. Most of the examples below are taken from The Other Wiki's page.

For the most part they are complete enough to be easily separated, making them regular twins, or the parents decide to sacrifice one for a simpler or better life for the other which results in a single person, and there also exists the parasitic conjoined twin, which has additional limbs or organs, but doesn't have a brain of its own and is usually removed early in life.

- Parapagus refers to the fairly uncommon arrangement of sharing the same pelvic bone, but what's really interesting is the dicephalic nature of these twins; in this case, the two essentially share a single body below the neck, with organs variously duplicated or shared. Though many of these twins didn't survive past infancy, or were separated in early childhood, a number have survived to adulthood without being separated, and show abilities and motor skills on par with non-conjoined people, despite the unusual requirement of having to cooperate to coordinate their shared limbs.