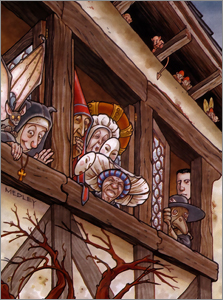 Castle Waiting is a comic book series created, written and illustrated by Linda Medley and published by Fantagraphics. It was originally self-published by Medley, and picked up by the publisher after achieving success. The first volume was published in serialised form in 1996-2001, and the second volume by Fantagraphics in 2006-12.

The story combines many Fairy Tales and fairy tale tropes together to form a cohesive world. Characters include the enigmatic plague doctor Dr. Fell of the I do not love thee, Dr. Fell epigram, Simple Simon, and a gold-egg laying hen (a reference to "Jack and the Beanstalk"). The eponymous Castle Waiting is the castle of "Sleeping Beauty" fame. Many years have passed since the dim-witted princess left the castle with her prince without a second thought. Only the wall of thorns and three handmaidens remain. Since then, the castle has become a refuge. The main story begins with Lady Jain, a pregnant woman seeking sanctuary at Castle Waiting to escape her horrible husband.

The comic was ranked as one of the best comic books of 2006 in a critics' poll in December, 2006, by Publishers Weekly.