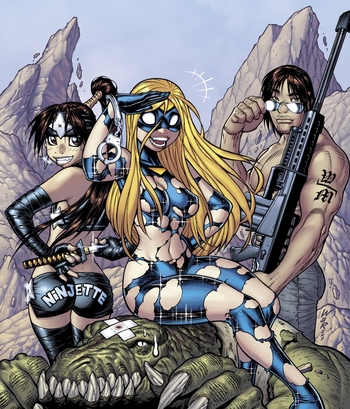 "It is kinda skin-crawly to think that, right now, some guy with "specialized tastes" might be getting, um, turned on by images of me all bound 'n gagged 'n distressed... or even, ick, you-know-what-ing to those images...! Brr...!"
!
"Y-You're not like that, right? R-RIGHT?! Tell me you're not... p-PLEASE! You seem r-REALLY NICE, okay?"
Advertisement:

Empowered is a graphic novel series written and drawn by Adam Warren; its chief protagonist is the eponymous Empowered ("Emp"), a Damsel in Distress-prone heroine. Empowered contains numerous deconstructions of superhero comics alongside healthy doses of bondage, fanservice, and comedy. Indeed, be forewarned, this is a very NSFW series full of a lot Gorn, strong language and sexual context.

It's unusual among both Western comics and manga in consisting of uninked pencil art (apart from the comics-format specials). (Adam Warren has said that this is less of a work-saver for him than you might think, as it means that he has to do all the shading and textures in pencil, instead of leaving it to the inking or colouring stage.)

Empowered is a plucky D-list (at first) superheroine who means well, even though she's generally hopeless when facing down villains. No matter how much she prepares or trains, she's inevitably betrayed by the fragile source of her superpowers: her outrageously skin-tight super-costume (which Emp is less than happy about, as she has numerous body-image issues). Emp's suit gives her immense power only while it's fully intact — and since it's made from a material that tears easily and can't be worn with anything over or under it, Emp is seldom in a position to benefit from it for long.

She spends most of her time being tied up by supervillains — a fact which has made her a laughing stock amongst her peers — and either naked or near-naked. Emp's confidence gets shredded as frequently as her fragile super-suit — and yet, she persists.

At the end of 2015, the creator started serializing the books online, complete with commentaries.

The site updates daily, Monday to Friday. As of July 2021, they are currently part way through volume eight of the eleven volumes published. (Naturally, they are NSFW.)

Note for anyone reading the online version - these pages contain spoilers for the printed volumes that have not yet been published online, peruse at your own risk!

The series also has two mini-series: "Soldier of Love", (one of the few times the series is completely colored) in which Emp and Ninjette fight against a Magical Girl trying to destroy love and "Emp and Sistah Spooky's High School Hell" (Drawn by another artist but still written by Adam) where Emp and Spooky are taken to Hell and forced to survive against the Alpha Bitches that tormented Spooky in her youth who're trying the steal her power.