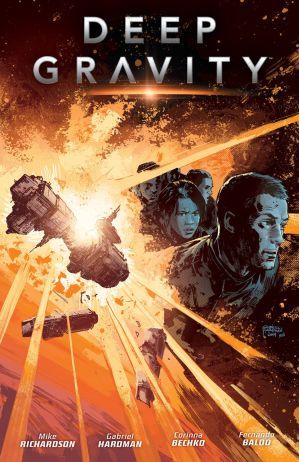 Deep Gravity is a Science Fiction comic miniseries with a story by Mike Richardson, script by Corinna Bechko and Gabriel Hardman, and drawing by Fernando Baldo. It was published by Dark Horse Comics in 2015.

The story is set mainly aboard the deep space freighter Vanguard, belonging to the Maelstrom Science and Technology Corporation. Maelstrom has exclusive rights to explore and exploit a planet called Poseidon, and Vanguard is just arriving there to transfer personnel and pick up valuable specimens of local lifeforms. Steven Paxon signed on to the ship's crew in an attempt to reconnect with his old girlfriend, Michelle Robinson, who's on Poseidon helping collect said lifeforms. When the ship is damaged, however, they and a few other survivors find themselves in a Sinking Ship Scenario.