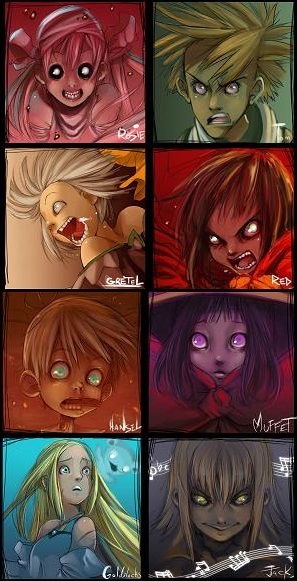 The main cast (or at least a few of them)
Advertisement:

This isn't the same nursery rhymes and fairy tales we were told as kids. Nope.

Ever After, a webcomic by S. Healey or "Endling

", takes a look at what happens to the characters that have to be placed inside the Everafter Maximum Security Asylum and Home for the Fantastically Traumatized so they can get better and keep the endings happily ever after and inhabitants tinkly winkly.

The story mainly focuses on Little Red Riding Hood, who isn't satisfied with the asylum's hospitality and gets Mind Rape from The Big Bad Wolf. She also wields a gigantic saw and said mind rapes make her go a little Ax-Crazy. Other characters include Horror Struck Mind Raped Goldilocks (but instead of wolves, it's bears), Hansel and Gretel, Little Miss Muffet and... a Giant Spider and more.

Ever After is on a Series Hiatus until Endling finishes with other, more important affairs. Until then, you can see what's been posted here

Not to be confused with the film starring Drew Barrymore and Dougray Scott.