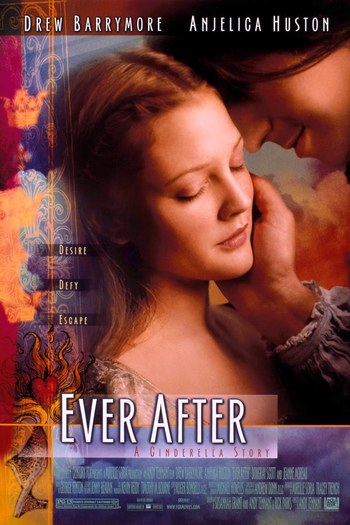 "And while Cinderella and her Prince did live happily ever after, the point, gentlemen, is that they lived."
—Grande Dame
Advertisement:

Ever After: A Cinderella Story is a 1998 film adaptation of the classic "Cinderella" story. Set in Renaissance France, the film eschews the magical elements of the original story and treats the plot as straight Historical Fiction.

The story begins when The Brothers Grimm are invited to the home of a French noblewoman (Jeanne Moreau) who tells them how much she enjoyed their story of Cinderella, but that they got some details wrong. She then proceeds to tell them this story...

Danielle de Barbarac (Drew Barrymore) is the beloved only child of the widowed Auguste de Barbarac and his late wife, Nicole de Lancret. When she is eight years old, he remarries the Baroness Rodmilla de Ghent (Anjelica Huston), and brings her home along with her two daughters, spoiled and cruel Marguerite and gentle but weak-willed Jacqueline. Shortly thereafter, he dies, leaving Danielle to the care of her stepmother, who already resents the love that he displays to his daughter (especially as he calls for her over his wife in his final moments), and the estate's three devoted servants - the housemaids, Paulette and Louise, and the retainer, Louise's husband Maurice.

The movie skips ahead ten years, to when Danielle is eighteen. Their estate has fallen onto hard times and things keep "disappearing," to the anger of the Baroness. Danielle has, of course, become a virtual house slave to the family, but takes comfort in the familial love she shares with the servants and the kindness she receives from Jacqueline. One morning, she is gathering apples in the estate's orchard when she spies someone stealing the horse of her late father. Enraged, she chucks apples at him, ultimately causing him to fall. It turns out to be the Crown Prince of France (Dougray Scott), running away from a father who wants to marry him off. To buy her silence, he gives her a great amount of gold.

Danielle and the Prince meet again when Danielle, disguised as a courtier and using her mother's name, goes to the castle to rescue Maurice, whom the Baroness had sold into slavery to pay off some of her debt. The Prince is intrigued by "Nicole's" beliefs and courage, and asks to meet her again. A courtship ensues, in which Danielle keeps trying to tell Henry that she is really not a countess and the Baroness gets increasingly suspicious of Danielle's odd appearances and disappearances. The King and Queen, desperate to marry their son off, are delighted that he has found a girl... but are keen to meet her, something Danielle wishes to avoid. Meanwhile, Leonardo da Vinci, who has been invited to court, befriends both Danielle and Henry and everything seems to be going along well, save for Danielle's growing anxiety about maintaining the masquerade.