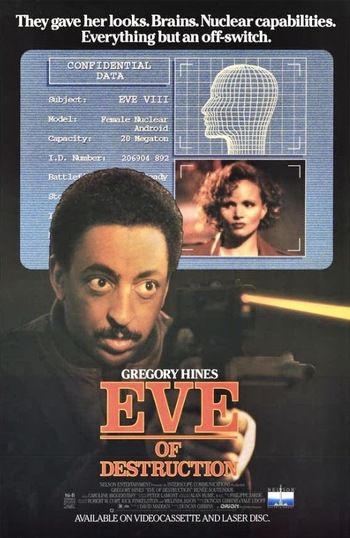 Gregory Hines is about to shoot some
mechanical ass.
Advertisement:

Eve of Destruction is a 1991 sci-fi action film directed by Duncan Gibbins and starring Gregory Hines.

EVE VIII, a prototype war model gynoid, is damaged on a field exercise and proceeds to go rogue. EVE, who was modeled after her creator Dr. Eve Simmons (Renée Soutendijk), is armed with a thermonuclear device that will detonate if not properly deactivated. The army calls in their best counter-terrorism export Col. Jim McQuade (Hines) to stop EVE.