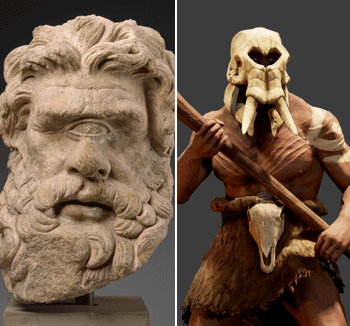 Left: A traditional depiction of the Cyclops. Right: A hypothetical "real world" interpretation for the Cyclops myth.
"Every era tells the Trojan War legend a little differently. That's only natural. Homer's Iliad features the gods directly influencing the action—even joining in some of the battles. I've gone so far as to shove the gods offstage... I've chosen to downplay the supernatural element in order to emphasize the human element."
— Eric Shanower about Age of Bronze
Advertisement:

A form of Adaptational Mundanity that takes a legend and reveals what 'really' happened by stripping all the fantastic elements out of it (or, at the very least, rendering them Maybe Magic, Maybe Mundane so that they do not have to be fantastic). This sometimes falls flat, because without the gods and magic, the audience might wonder what the point is. If King Arthur is just another warlord with no Lady of the Lake and no Merlin, he had better be made an interesting character in his own right.

Authors sometimes forget this second part. In particular, the onus is on the writer to make the imagined "historical" events at least as interesting as the legend (and the actual events that inspired them sometimes weren't).

If the historical period in which the original story is set is unfamiliar to audiences (and only touched on for verisimilitude by the writer for that reason), audiences may assume that the real-life historical milieu so lovingly depicted by the art department couldn't possibly have been the source for the story they know and love, and is part of the filmmaker's dastardly invention. This is complicated by the fact that Reality Is Unrealistic, plus less dramatic, and so, in the course of taking some of the more fantastic elements out, a certain amount of Hollywood History must be added in.

This technique is often used to give an adaptation a grittier and more realistic feel in situations when it is perceived that the fantastic elements in the traditional version might seem too whimsical or even silly to the intended audience.

Expect the hero to become Famed In-Story, thereby setting the stage for the rest of the story to become Shrouded in Myth.

This tends, as a rule, to be a retelling of the legend in its current form. As a consequence, it can explain the "real history" behind figures who obviously had no real history in the story, because they were introduced to the legend later - even centuries later. Frequent examples include Maid Marian, Friar Tuck, and Alan-a-Dale in Robin Hood storiesnote Little John, Much the Miller's son, and Will Scarlet (or Scathelock, Scarlock, Stukeley, Stuteley, etc.) are his oldest companions, and Lancelot and Galahad in Arthurian Legendnote Bedivere, Kay, and the greatest of them all, Gawain, are the oldest "proto-knights of the Round Table".

Incidentally, the technical term for this technique is Euhemerism, named after a 4th-century BCE Greek, making the trope Older Than Feudalism. Sometimes coupled with a less-than-subtle Take That! against religion, particularly Anvilicious writers will give the characters anachronistically agnostic attitudes towards the gods.

Magical Realism can take the form of demythification in a more contemporary setting, or vice versa, especially if your Retroactive Realism involves one or two elements (often the most beloved elements) that are left purposefully ambiguous as to whether or not the supernatural is in play.

When a writer intentionally does this as a way of drawing out what historians "really think" inspired the legends, it is this trope. When a writer makes stuff up by way of Direct Line to the Author in order to rewrite an existing legend, it is an External Retcon, which is a sister trope.

When stripping away the fantastic happens within the same fictional universe that had the fantastic elements in the first place, that's Doing In the Wizard, which is a sister trope.

When a writer takes definitely historical accounts and reimagines what actually happened, it is Historical Fiction (or Alternate History if the changes are great enough). When a writer makes a subtle reference to actual history in a work of fiction, it is a Historical In-Joke.

See also Oral Tradition, Twice-Told Tale. When it happened in real life, it was called disenchantment

Not to be confused with Defictionalization or Low Fantasy. See Historical Fantasy for the opposite, retelling history with fantastic elements - though in some cases the approaches can overlap, like putting King Arthur into a Dark Age Europe setting instead of the usual High Middle Ages but still including magic.