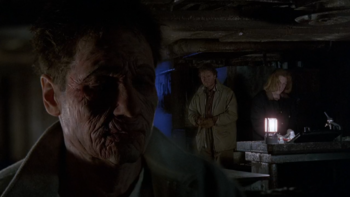 A literal race against time for Mulder, Trondheim and Scully.
Written by Howard Gordon (Story & teleplay) & Alex Gansa (Teleplay)
Directed by Nick Marck
Scully: There is no hard evidence to indicate that this is a time warp.
Mulder: We're the evidence, Scully! Look at us! We're aging by the minute.
Advertisement:

Mulder and Scully investigate a US Navy vessel trapped in the Norwegian Sea, where the crew and ship have become subject to rapid aging.

"I think I hear the wolf at the door."