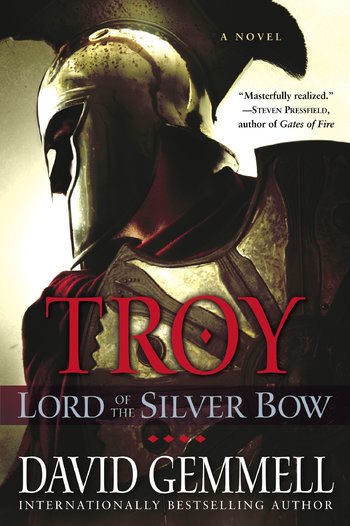 "Beneath the Shield of Thunder waits the Eagle Child on shadow wings to soar above all city gates, till end of days, and fall of kings."
Advertisement:

The Troy Saga is a series of historical fantasy novels written by David Gemmell, detailing a reimagining of the Trojan War. Set in the late Bronze Age and in what is called in the time period "The Great Green" note  The term used for the Mediterranean , the series primarily follows three main characters. Helikaon, the troubled prince of Dardania and an ally of the golden city of Troy. Andromache the proud royal priestess of the isle of Thera fated to wed to Hektor, the crown prince of Troy. And Odysseus the ugly, but famed story-telling, King of Ithaka.

In addition to the aformentioned, the series features a cast size befitting of its epic scope that ranges from the famed characters of Homer's The Iliad to characters of more humble stock created for this series. The trilogy chronicles the years both leading up to and during the epic conflict that comes to be called the end of "The Age of Heroes".

Fall of Kings (2007)note  After Gemell's death in 2006 his wife, Stella Gemell, completed the third book