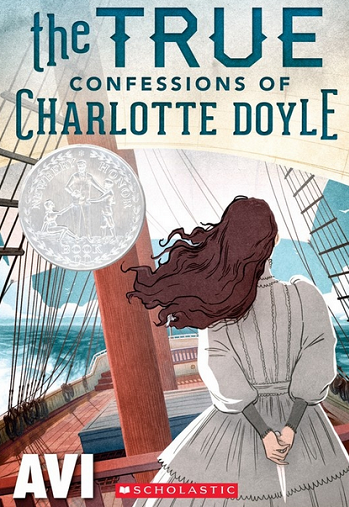 The True Confessions of Charlotte Doyle is a Newbery Award-winning young adult novel of historical fiction written by Avi and published in 1990.
Advertisement:

Charlotte Doyle, a thirteen-year-old girl brought up in upper-class society in 19th century England, leaves her boarding school at the beginning of summer in order to return to her family in America, voyaging aboard the ship The Seahawk. However, she finds that she is the only passenger on the ship, due to the other passengers having been told that the voyage would be too dangerous, and the only female besides. She befriends the elderly sailor Zachariah, who warns her of the cruelty of the ship's captain, Captain Jaggery. Eventually Charlotte is caught up in a plot of mutiny against the captain and is forced to question her loyalties and learn about the hardships of life at sea.