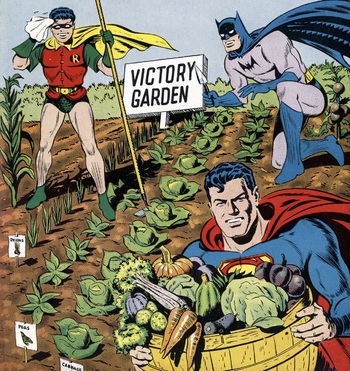 Valerius: Back to barracks, General? Or to Rome?
Maximus: Home... Wife, son, the harvest.
Quintus: Maximus the farmer... I still have difficulty imagining that.
Maximus: You know, dirt cleans off a lot easier than blood, Quintus.
— Gladiator
Advertisement:

Someone who is in the position where they could do something much more significant, but still chooses an agricultural job for sentimental reasons.

When done with badass fighters, it is often used to symbolize that after seeing so much destruction and violence, they want a chance to actually do something constructive, put down some roots, and see some new growth, maybe as a way of dealing with post traumatic stress. In brief, instead of destroying life, they now seek to raise and maintain it. It might overlap with Real Men Wear Pink, especially when it is about flowers, or gardening, to show that this tough man always secretly wished for such a non-violent, nurturing pastime. For others, the pastoral life is particularly sweet because they've lived their entire lives on the move and this is the first place they can really call home, or maybe this is what they have really been fighting for all along (soldiers Fighting for a Homeland, for example).

It may turn out to be a harder job than they originally thought.

When it is professional agriculture, like farming, it often happens with politically or socially important figures, to show that they wish to be mere workers of the land. They might make snarky comments informing us that in fact, this is the first really useful thing they've done. This sort of response is typical of the Cincinnatus, possibly an Ur-Example.

See also: Home Sweet Home and Retired Badass for retirement, and Arcadia for peaceful life. The opposite of (and a play on) Call to Adventure.