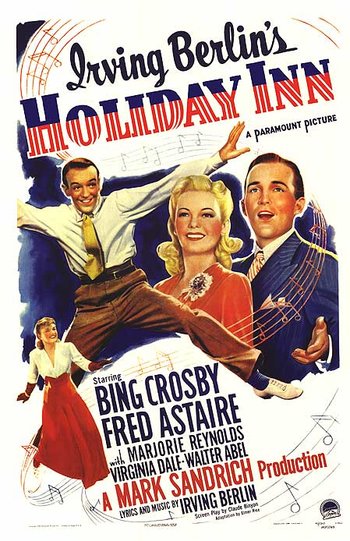 Jim Hardy (Crosby), Ted Hanover (Astaire) and Lila Dixon (Virginia Dale) form a musical act together in Manhattan. Jim wants to retire with Lila, to whom he is engaged, and live on a farm he's purchased in Connecticut. However, Lila loves Ted (and show business), and so Jim retires alone to his farm... or attempts to.

After nearly a year of attempting to run a farm, a nervous breakdown, and a brief stay at a sanitarium, Jim returns to Manhattan on Christmas Eve to see his old friends. He has what he thinks is a brilliant idea - he wants to convert the farm into an entertainment venue called Holiday Inn, which will only be open on holidays. Ted and Danny Reed (Hanover's agent) scoff at the plan.

Danny stops at a flower shop in the airport, where he is recognized as an agent by Linda Mason (Marjorie Reynolds) who asks him for a job. He directs her to the Holiday Inn, and gives her a ticket to Ted and Lila's show. She goes, as does Jim, who pretends to be the owner of a big club. She, in turn, pretends to be a friend of Ted's and a celebrity. Ted and Lila come to the table after the performance, and Linda promptly flees.

The next morning, Linda arrives at the Holiday Inn, and she and Jim realize that both were fooling the other the previous evening. They sing "White Christmas" together.

On New Year's Eve, Holiday Inn finally opens to a packed house. Meanwhile, in Manhattan, Ted finds that Lila has left him for a Texas millionaire, and goes out to the Holiday Inn, thoroughly drunk. He dances with Linda, proceeds to bring down the house blind stinking drunk, and then promptly fall unconscious. Danny arrives at the Holiday Inn just as Ted is carried upstairs.

The next morning, Ted awakens at the Inn with a hangover and no memory of the previous night. Danny, however, is thrilled that Ted has found a new partner, but dismayed when neither he nor Ted can identify the girl. Jim, of course, knows Linda, but does not give any information away, as he fears that Ted will take Linda away from the inn.

Then comes Lincoln's Birthday. In an attempt to disguise Linda, Jim decides that all of the performers and musicians will perform in black face. Ted and Danny return, and attempt to find Linda, but their search proves fruitless. Jim sort-of proposes to Linda.

At the rehearsal for Valentine's Day, Jim sings "Be Careful, It's My Heart" to Linda, who begins dancing. Ted and Danny arrive, and Ted dances with Linda. The music abruptly halts as Jim sees Ted dancing with Linda. Danny suggests that Ted and Linda open their new act at the Inn, on Washington's Birthday. Jim dejectedly concedes.

Washington's Birthday arrives, and Ted and Linda dance in elaborate 18th century costumes and wigs. However, whenever they try to kiss, Jim changes the music from the period minuet to jazz.

On Independence Day, Ted and Danny have arranged for Hollywood representatives to be at the Inn to determine whether or not Ted and Linda are suitable for film. Jim, overhearing their plan, bribes the hired hand Gus (Irving Bacon) to ensure that Linda does not arrive at the Inn. Gus picks up Linda in the Inn's car, and drives it into a creek. Linda attempts to hitchhike back to the Inn, and is picked up by Lila. Lila, it seems, has left her Texas Millionaire after he turned out to owe millions rather than own then, and has been summoned to the inn by Jim to dance with Ted. Linda drives Lila's car into the same river where Gus is still stranded. At the inn, Ted improvises a solo dance with firecrackers. Linda arrives, is furious at Jim, and accepts Ted's offer to do motion pictures with him. The Hollywood representatives want to make the film about Holiday Inn; Jim reluctantly agrees.

At Thanksgiving, the inn is closed, and Jim is depressed. He plays his Thanksgiving song on the record player, and makes bitter self-deprecating jokes over the lyrics. His housekeeper Mamie (Louise Beavers) tells him to go to California and win back Linda.

In California, on Christmas Eve, Ted is prepared to elope with Linda after the night's shooting, which would complete the film. Jim runs into Ted and Danny, who realize what he is doing and attempt to lock him in a closet. It backfires, and Jim locks them in their dressing room. Jim walks around the set, which is a recreation of Holiday Inn. He leaves his pipe on the piano, and hides. Linda comes to the studio, and filming begins. She recognizes the pipe, and runs to Jim.

Finally, New Year's Eve at the Holiday Inn features a reprise of Jim, Ted, and Lila's old act, with Linda added in. Jim and Linda stay at the Inn, while Ted and Lila, reunited, go off to a life of showbiz.

A Screen-to-Stage Adaptation premiered in 2014 and hit Broadway for the 2016 holiday season. This version is very faithful to the film; notable differences include making Linda the farm's previous owner, giving Mamie a Race Lift by replacing her with a Girl Friday very much in the mold of Emma from White Christmas, and dropping both Washington's & Lincoln's birthdays.

Incidentally, the hotel chain "Holiday Inn" was named for this movie.

This Movie is the Trope Namer For: