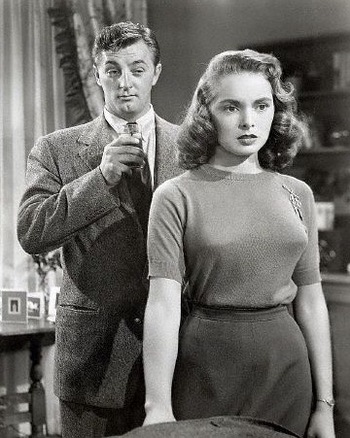 Connie Ennis (Leigh) lives in New York City and works for a department store as a "comparison shopper"—a real job back in the day, a mild form of corporate espionage in which the comparison shoppers would go into rival stores and pretend to buy products, only to bring them back to their own stores to note the price and quality of said goods before returning them.

A few days before Christmas, Connie visits one such rival store and buys a model train from toy department salesman Steve Mason (Mitchum) without even asking about it. When she brings it back the next day, he quickly sniffs her out as a comparison shopper. He could turn her in, which would get her blacklisted from other stores and probably fired, but assures her he won't... which then gets him fired after his manager overhears their conversation.

Meanwhile, Connie goes home to her son Timmy. Connie is a war widow, her husband having been killed in World War II. Connie is being courted by handsome, affable lawyer Carl (Wendell Corey). In fact, they've been seeing each other for two years, but Connie, still carrying a torch for her husband, doesn't want to commit. Carl is persistent, though, and has just about worn down Connie's resistance when darkly handsome Steve Mason pops back up into her life, returning her comparison shopping packages and later giving Timmy the train set for Christmas.

This holiday movie with a kinder, gentler Robert Mitchum was a deliberate effort to soften the actor's tough-guy image after he was busted for smoking marijuana, a Serious Business scandal at the time.