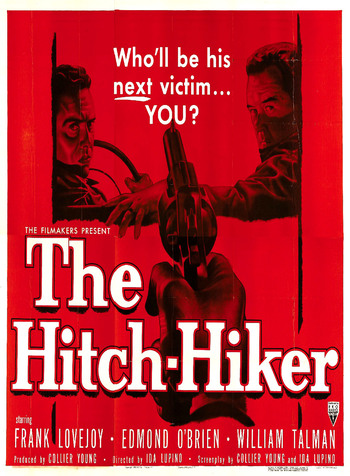 The Hitch-Hiker is a 1953 Film Noir directed and co-written by Ida Lupino, based on the murder spree of Billy Cook

Two friends, Roy Collins (Edmund O’Brien) and Gilbert Bowen (Frank Lovejoy), are driving to Baja California for a fishing trip. Unbeknownst to them, Emmett Meyers (William Talman) has been on a killing spree, posing as a hitchhiker to his victims and evading the authorities all throughout California. The friends pick up Meyers and find themselves kidnapped and forced at gun point to take Meyers to Santa Rosalia, a fishing town where he can escape to Mexico proper.

This film has the distinction of being the first Film Noir directed by a woman, Ida Lupino. She was the only female director working in Hollywood during The '50s and this film was made with her own production company, The Filmakers.

Not to be confused with the TV series.

The Hitch-Hiker shows the following tropes: