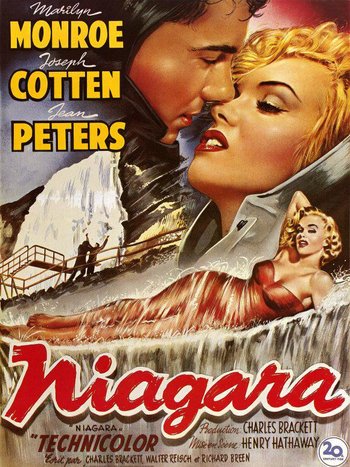 "Why should the Falls drag me down here at five o'clock in the morning? To show me how big they are, and how small I am? To remind me they can get along without any help? All right, so they've proved it. But why not? They've had ten thousand years to get independent. What's so wonderful about that? I suppose I could, too, only it night take a little more time."
— opening narration by George Loomis
Advertisement:

Ray and Polly Cutler (Showalter and Peters), arriving for a delayed honeymoon at Niagara Falls, find their reserved motel cabin is still occupied by George and Rose Loomis (Cotten and Monroe). After the Cutlers politely accept another, less desirable cabin, the two couples become acquainted.

The Loomises have a troubled marriage. George is jealous, depressed and irritable, and has recently been discharged from an Army mental hospital after his war service in Korea. Rose is younger, very attractive, and bored. During their time at the Falls, Polly discovers that Rose is having an affair with another man, and both Cutlers witness George's rage. Soon enough, Polly becomes a confidante of sorts to George, while Rose's intentions turn out to be muddier than they seem.

Monroe was given first billing in Niagara, which elevated her to star status. Her following two films of that year, Gentlemen Prefer Blondes, with Jane Russell, and How to Marry a Millionaire, with Betty Grable and Lauren Bacall, were even bigger successes. One of the last films for Jean Peters, who soon retired from the screen in order to marry Howard Hughes.