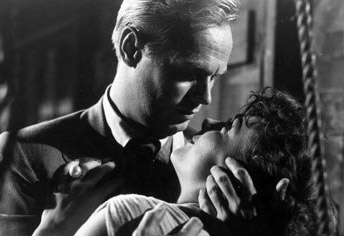 Pickup on South Street is a 1953 Cold War spy Film Noir written and directed by Samuel Fuller and released by the 20th Century Fox studio.

Barely out of prison, loner and pickpocket Skip McCoy (Richard Widmark) quietly helps himself to the contents of a woman's purse. His beautiful victim, Candy (Jean Peters), turns out to be an unwitting courier for the communist underground; his booty is actually microfilmed U.S. government secrets, formerly en route to Moscow. Both the FBI and Candy's employers are desperate to retrieve the film.