Film / How to Marry a Millionaire 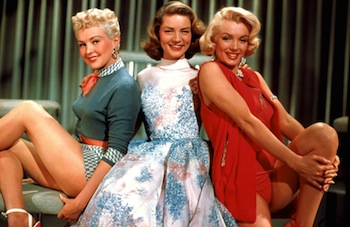 All my life ever since I was a little girl I've always had the same dream. To marry a zillionaire.
Pola Debevoise: I want to marry Rockefeller.
Schatze Page: Which one?
Pola Debevoise: I don't care.
Advertisement:

A Romantic Comedy film from 1953, directed by Jean Negulesco (Johnny Belinda) and starring three of the most famous leading ladies of the era as the main characters: Lauren Bacall, Marilyn Monroe and Betty Grable.

Three women rent an expensive apartment to appear rich. Their plan is to each marry a millionaire. To be able to afford the rent, they keep selling the furniture.

Things become complicated when love starts to interfere with their plans.

Partially inspired by the much earlier The Greeks Had a Word for Them.