Film / The Greeks Had a Word for Them 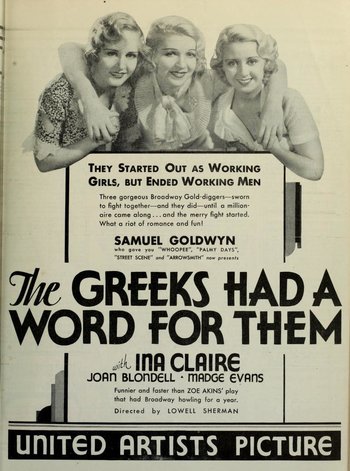 Jean, Polaire, and Schatze are three sometime showgirls living in Prohibition-era New York on the hunt for a good man or even better a rich man. But just because they are friends doesn't mean they are going to play fair with each other. Hilarity Ensues.

The Greeks Had a Word for Them (also known as Three Broadway Girls) is a 1932 pre-Code comedy based on the Zoe Akins play The Greeks Had A Word For It. It was directed by Lowell Sherman and starred Joan Blondell, Madge Evans, and Ina Claire. A generation later it would be one of the inspirations for the more famous How to Marry a Millionaire.

Notable for featuring one of the earliest uses of a variation on the Video Will in a movie.

The movie is in the Public Domain and can be viewed online for free here.