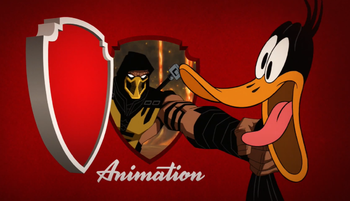 GET OVER HERE, FOLKS!
Unlike a regular television crossover, the Crossover Punchline is a brief gag. The Crossover is not vital to the storyline, it's just there for the fun of it. Used for laughs, it generally also uses the tropes All Just a Dream or Alternate Universe.

If the two works are owned by the same company, it doubles as Company Cross References. If owned by different companies, it can be a Lawyer-Friendly Cameo.