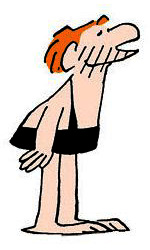 B.C. is an American newspaper comic strip created in 1958 by Johnny Hart. It focuses on a small band of cavemen, led by one named B.C. Others in the strip include Peter, Clumsy Carp, Curls, Thor, Wiley, Grog, the Fat Broad and the Cute Chick (both named Jane and Grace, respectively, as of 2019). There is also a cast of talking animals that includes John the Tortoise, Dookie Bird, a family of ants, an anteater, dinosaurs, clams, snakes and an apteryx: a small wingless bird with hairy feathers (a.k.a. a kiwi to the rest of us).

Initially, B.C. was a gag-a-day strip. After Hart became a born-again Christian in 1977, the strip gradually began adding more and more of Hart's religious and political beliefs until most strips were Christian-themed. Some newspapers refused to print certain strips that were deemed overly proselytizing. After Hart's death in 2007, it reverted to a mostly gag-a-day strip maintained by grandson Mason Mastroianni (who also took over Hart's other strip, The Wizard of Id).

B.C. also had a brief stint as a video game character, with B.C.'s Quest for Tires, released by Sierra in 1983. A sequel, entitled Grog's Revenge, was released a year later in 1984.