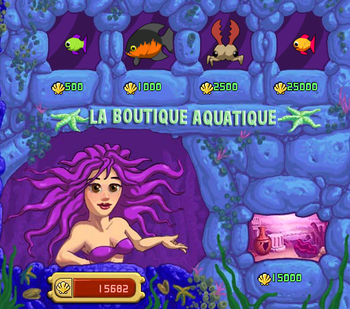 Scallops, conch shells and oysters accepted.
Money hasn't always been golden coins and paper bills. History has seen many, varied currencies, and seashells were very popular choices. Some are really beautiful and look valuable enough. Entire civilizations have used seashells as their currency, in many parts of the world, including North America, Oceania, Africa and Asia. Notably, the use of cowry shells

as money in China can be dated back three millennia. The Chinese character for "money" even is a pictograph of a cowrie shell!
Advertisement:

These nacred currencies can be sometimes encountered in fiction, typically in sea-related tribes. After all, mollusks (animals that make the shells) live in water, and look very precious, and as such they can make excellent replacement for the typical golden cash.

A Subtrope to Weird Currency.