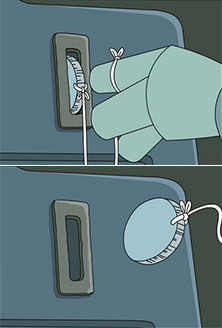 Characters inserting a tied coin into a coin-operated device and then pulling the coin out with the string to steal an item or service from the machine. However, this trope also extends toward other things.

Later in the 1980s, when video game arcade operators realized that people were doing this, manufacturers started putting a string cutter into the coin mechanism. If you tugged back to try to hit the switch again, the string would cross the cutter and be severed by it, thus capturing the coin and preventing its reuse by the crooked customer. In modern times, coin-operated machines simply have a one-way ratchet, preventing the return of any coin once it has passed the counting mechanism.

A similar trick existed with banknotes and vending machines: attaching sellotape to the note, feeding it into the machine, then pulling it back out. Again, as with the coin string trick, this will not work on any machine built since the early 90s.

Not to be confused with Heads, Tails, Edge, when a coin flip is tied, or Hypno Pendulum, which is another use for a coin on a string. Compare Cash Lure.

Not wanting to pay for entering into the Museum of Modern Inventions, Donald resorts to his lucky coin

Not wanting to pay for entering into the Museum of Modern Inventions, Donald resorts to his lucky coin