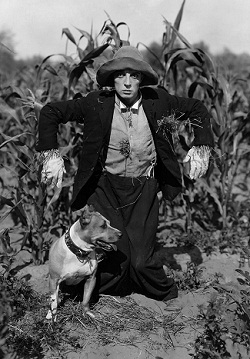 Buster and Luke the Dog
Advertisement:

The Scarecrow is a 1920 two-reel short film, starring Buster Keaton, directed by Keaton and Edward Cline.

Buster and another farmhand are rival suitors for the farmer's daughter (Sybil Seely). When an incident with a threshing machine leaves Buster undressed, he steals the clothes off a scarecrow. Hilarity Ensues.

Various sources credit a 14-year-old Mary Astor with making her screen debut in his movie, but apparently her footage was cut. The Scarecrow is in the public domain and can be viewed in its entirety at Google Video.

Not to be confused with the Batman villain, The Wizard of Oz character, the 1983 Soviet film Scarecrow, the 1973 movie Scarecrow starring Gene Hackman and Al Pacino, the 2000 film by Warner Bros., or Doctor Syn ("The Scarecrow").

"The Scarecrow" provides examples of: