Lost in the Maize 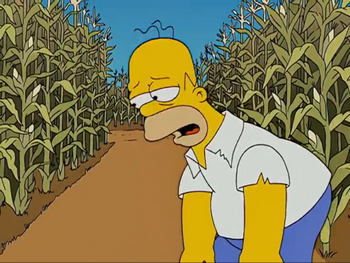 "This maize is too hard for me!"
"He began to walk in that direction, not having to bull through the corn any more. The row was taking him in the direction he wanted to go, naturally. The row ended up ahead. Ended? No, emptied out into some sort of clearing..."
— Stephen King, Children of the Corn
Advertisement:

There's just something about a field of corn that spells creepy. Maybe it's the fact that corn stalks grow very tall and seem to go on endlessly, preventing anyone who happens to be wandering among them from seeing more than a few feet ahead at a time. Also, each stalk looks exactly the same, so good luck finding your way out. Combined with the fact that they are only found in rural areas, this means that you could be out in the middle of nowhere and no one would see you disappear, or even be around to hear you scream on the off chance that you are not alone.

If characters find themselves in a cornfield, they will almost always get lost. Frantic chases through cornfields are popular in the Horror genre, and double points if it happens to be at night.

Note that despite the trope name, scenes like this don't necessarily have to involve corn.note Which is a good thing, as precisely which cereal crops are defined as "corn" differs between America and Europe — in Europe, corn typically refers specifically to sweetcorn, a variety of maize, with other varieties being referred to as maize, while in America there's usually no distinction, with all varieties of maize being referred to as corn. Long grass is also popular, especially in wilderness settings, and this trope can apply to other kinds of vegetation where it's hard to see anything below neck level. Compare The Lost Woods, where non-domestic plant life is overwhelming or spooky.

This is also the place to find Scary Scarecrows or Crop Circles. May overlap with Corny Nebraska if the creepy cornfields are in Nebraska.

The grass in this section of the mountain is so tall Bobby cannot see over it and gets lost.

The grass in this section of the mountain is so tall Bobby cannot see over it and gets lost.