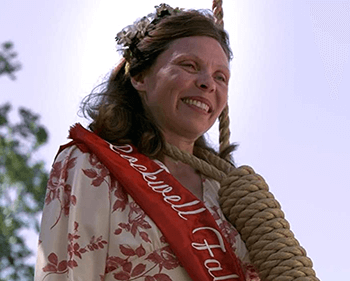 Meet this year's lucky winner...And loser.
I told them that when Legionaries are disloyal, some are punished, the others made to watch. And I announced the lottery. Each clutched his ticket, hoping it would set him free. Each did nothing, even when "loved ones" were dragged away to be killed.
—Vulpes Inculta, Fallout: New Vegas
Advertisement:

Hey, you just won the lottery! Sounds pretty good, right? After all, you just got a few million dollars, and are, unless you stupidly spend it all, probably set for life. Who wouldn't want to win the lottery?

Well, you wouldn't want to, if it was one of these lotteries. The Lottery of Doom is a lottery where the prize is something really bad happening to the "winner," usually death. The reason for the Lottery of Doom varies, ranging from an attempt to keep the population down, appeasing a dragon, wrathful god or Monster of the Week, select a "volunteer" for some dangerous or outright lethal task that needs to be done or just to be creepy. Sometimes the lottery players know that it's a Lottery of Doom, sometimes they don't. On occasion, there's a pretty significant prize alongside the horrible doom, or at least you will get pleasant accommodations until the fatal moment, but you really shouldn't get too comfortable...

So next time you buy a lottery ticket, be sure to read the fine print.

In a Town with a Dark Secret, expect this to overlap with A Fête Worse Than Death.